The scene was set; an interview with Liam Gallagher, at the Grand Hotel, just prior to his new band, Beady Eye, playing Brighton Centre that night. He doesn’t do a lot of interviews these days. Likes to meditate in his room now, rather than rip into journalists. He’s a changed man but always good value. I was told that a few minutes in the company of Mr.G, would be a memorable moment in my life and who am I to argue? He’s a twat, or an icon, depending on who you talk to but I was willing to find out for myself.

If I was given the choice, I would probably say that his elder brother, Noel Gallagher, would be my No.1 choice. He just seems more, well, saner? Very dry, very intelligent and very funny; whereas Liam seems like the loose cannon in the family; the weird kid, best ignored. Gallagher junior seems slightly unpredictable but worth a shot, if you catch him on a good day.

Apparently, this was a good day to interview Liam. I was told he was strutting around the Grand, happy to talk to the staff, pout for photos and sign expensive serviettes. I was ready for him; questions prepared, camera at the ready and hair looking good. And then I got the call; the interview time had been bought forward and I was unable to do the slot. I was on the school run. As much as I love Liam, I love my son more (vote for me in this years ‘Father of the Year’).

I was gutted. But I headed down to the Grand later anyway to see if I could grab him in the toilet or something. There was very little happening at the hotel, so I headed to the venue and loitered outside with the autograph hunters but still no sign of Liam. I was told he was inside already and preparing to go on stage. 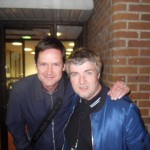 The sex mad fella from the Inbetweeners popped out for a fag but that was as exciting as it got. And then, just as I was about to leave, out came Gallagher. Not Liam, not Noel but Paul. He DJ’s on the tour and he’s obsessed with making fresh juices; no Liam and no Noel for that matter but a nice chap.

Sometimes in life, you have to settle for bronze.