TOOLED UP FOR APRIL FOOLS

I had a hoot on the Breakfast Show this morning. In fact, I’d go as far to say, it was my dream show. Why so? I hear you ask. Well on April Fools Day I get to lie. I get to lie for a good four hours. I find this most satisfying.

It’s been a tradition on the Breakfast Show to ‘go big’ on the first day of this particular day. We don’t want to particularly fool anyone, although it’s always a bonus if we do. We just want to be ridiculous. And we had some pretty ridiculous ideas before we landed on the one we did this morning.

My initial idea was for Jim Davidson to open Pride. Pride weren’t keen on this. Another idea was for Brighton and Hove Albion to announce that they were to ground share with Crawley Town and that the seats at the new Amex Stadium would be blue and red stripes as a consequence. The Albion weren’t keen on this. The Churchill Insurance dog being placed strategically on top of Churchill Square shopping centre, saying ‘Oooh yeeesss,’ every half an hour wasn’t greeted with huge enthusiasm from the powers that be either.

In the end we went with a double whammy. Managing Director of Brighton and Hove buses, Roger French popped in to announce that to celebrate the launch of the new swipe card ticketing system, there would be a live entertainment for one day only across all the major bus routes; burlesque dancing, fire breathing, plate spinning; the lot. He was fantastic. 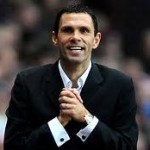 Our second prank was Albion boss Gus Poyet dropping the bombshell that the Seagulls new kit next season would be green and black to celebrate the stadium opening. When asked if the fans would be upset, he answered, ‘they’ll have to change a couple of songs but they’ll be fine.’ Brilliant. Gus and Roger, we salute you.

And a special mention for the only punk rock newsreader in the UK, Graham Levett, who was a star throughout. I love you.