THAT WAS THE BEST DAY EVER

Hello and welcome to my blog. I am a relieved man as I write this post. It could have been so very different. I had a very significant day last weekend. In fact I would go as far to say it was momentous. It’s the day every Dad dreams of; the day when you get to take your son to his first ever football match.

Now this wasn’t just about the match over the weekend, this was about converting my son in to a fully fledged football fan. Once that was confirmed, I had to guide him towards the right team. The team he and I will support until our dying day. And you need to catch them early, before outside influences corrupt them and destroy your dream.

My son has become a football through his mates, school but mainly from being around his football obsessed Dad. It started for my son, as it does for a lot of kids, by collecting football cards. It only takes one kid at school to do it and then it sweeps through the playground like a bad case of nits.

Next up was the World Cup last year. Thank you England for nearly ruining any faltering interest but thankfully Spain played pretty football and my son was hooked. I told him to get use to disappointment with the England team and to focus on a club side; my club side. 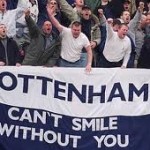 Guy's wife was unhappy about the 'gathering' in the lounge room.

There was a problem though. Kids like winners and my son is no different. He’d heard on the grapevine that Man.Utd were quite good. I rubbished this immediately but he liked Rooney, Berbatov and Giggs and he knew they were almost always either on top or near the summit of the Premier League.  I told him it was boring supporting a team that everyone supported, who consistently won, how about a team that are building towards that but lose every now and again? That would be so much more exciting. Say, for example, just plucking a team from the air…Tottenham Hotspur?

He wasn’t convinced but after some extra exposure in the Champions League and some superlative performances from a certain Welshman, I had him interested.

And then the big test. Take him to his first live game and keep your fingers crossed that Spurs win. I took him to the Lane last weekend (he chose the Charlton game because he thought we might lose against Man. Utd), we spent twenty quid in the Spurs shop, I piled him with chips and diet coke and then thankfully Spurs came up trumps with a 3-0 win. By the second half, he was even joining in the singing.

And then after the game, on the train back to Brighton he said the words I’ve always dreamt of…

Now that is what I call a result.