READY FOR THE GEEKEND

One has to admire the geek. Geekness in Geekdom, should be applauded. I say this, as I have just experienced it at first-hand. I have just returned from the ultimate geekfest, the SFX Weekender; the biggest gathering of science-fiction geeks in Europe. And they all converged in the unlikely setting of Pontins in Camber Sands.

Now I have no interest in science fiction. Sure, I appreciate Star Wars, one of the finest films ever made; until George Lucas ruined it all by doing a prequel with Ewan McGregor (a performance that made Keanu Reeves look animated). The original Star Trek was brilliant, the relationship between Kirk and Spock being the centre of that particular universe but after that I’m struggle to be inspired. 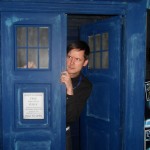 'I'm sure this is still Camber Sands. I asked for Zargon.'

However, when I was asked to host this space extravaganza, I jumped at it. I wanted to do it because I boldly wanted go where no man has gone before. I was fascinated. I was drawn towards the geeks. And I was not disappointed.

Catching the train from Brighton to Rye, it was easy to spot the sci-fi geek.. I’m not one to stereotype but hey, lets stereotype. The average sci-fi fan was pasty, a lack of vitamin D clearly evident on first viewing. Many of them (how can I say this without offending?) looked single. No reflection on their looks or their personality, they just looked like they prioritised C3-PO over the attractive girl that works in accounts. Most tellingly though was the child-like excitement in their eyes; the anticipation at what lay ahead over the coming days.

And that is what I love about geeks. No matter how old or conformed into society they might be, they refuse to let go of their childhood obsession with the one thing they love more than anything; Science-Fiction.

And for that, I tip my stormtrooper helmet off to them.