Hello and welcome to my blog. I write this as a sleep deprived Breakfast Presenter. No surprises there, for the average morning jock will arise around 4am. However, I’m particularly deprived today, as I have been hit with the curse of the noisy neighbour. Or in this case; neighbours. As the song goes, everyone needs good neighbours and in this case I most definitely do. Unfortunately though, I have bad ones; the worst kind. Residing just above my six foot plus frame, I have three students.

These three students are nice enough people. We’ve even exchanged pleasantries in the corridor of our block of flats; even the odd student-based jokes on loans and rioting (how we laughed). There’s nothing wrong with them as people, it’s just that we have very different lifestyles. I get up at 4am; they get in at 4am. I like to meditate of an evening, perhaps even have a bath to Classic FM, as I wind down from a hectic day in the world of media. They like to drink cheap lager and listen to drum n’ bass to pass the time. It’s not a battle as such, it’s just two lifestyles seemingly clashing. 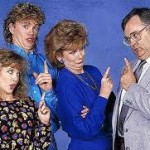 'I really wanna see those fingers.'

However, despite downplaying it somewhat, battle lines are being drawn and conflict is just around the corner. Things came to a head earlier this week, when the students decided to have the mother of all parties on that most popular day of the week for parties; Monday. How I love to large it on a Monday.

Meanwhile, I’m below them, lying in bed having given up any faint hope of sleep, plotting their downfall. Let me tell you, my plotting has taken me to some very dark places; places that would get you a primetime slot on Crimewatch within the month. On Monday, I contemplated mass murder but my wife reminded me that the only weapon I had was my son’s light sabre and even if it did cause some damage, I would have woken up the following morning, mortified that I had tried to wipe out the dark forces of evil with what is essentially, a plastic stick.

All I can do is sit tight and hope that it’s a passing phase. That maybe, just maybe, the students will have to get their heads down and study one day.

The other option is to put this house up for sale. Anyone want a three-bedroom flat off Upper Lewes Road? Nightclub included?

Ok, it’s time for sleep. I have the light sabre under my pillow as we speak.