Hello there. It’s a glorious sunny day in Brighton today but I very nearly didn’t see it. At approximately 8.30pm yesterday I decided I couldn’t go on and took the decision to walk into the sea. However, on leaving the house, I decided it was too cold and returned to the scene of my trauma. 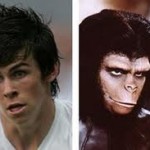 Yes, I had football depression; a recognised medical condition affecting men from the age of 2 until, erm, death. I had just seen my team, Tottenham (I can say it now; couldn’t last night) completely capitulate in front of my very own eyes.

Let me set the scene; Champions League, San Siro v Inter Milan. Probably the biggest game in our recent history and we were 3-0 down, with our goalkeeper sent off. It got worse. Inter scored another before half-time and it was this that plunged me into ‘football depression.’ A very dark place to be, ‘football depression’ sweeps over you, when you realise your team might be a bit shit. This was the case last night. Spurs were a bit shit.

After deciding against my very own Reginald Perrin, I returned to the match, 4-0 down, expecting double figures at least. Whilst I was battling depression, Spurs had to battle for pride and they did exactly that.

Gareth Bale, a man that proves the theory on evolution, somehow scored the first hat-trick of his career and we somehow finished respectable 3-4 losers. My depression was lifted and i can honestly say I’ve never been so happy in defeat.