I PREDICT A RIOT

It’s been hard to take in the events of this week and understand how and why it’s happening. There’s the immediate shock of the event itself, the aftermath played out in the media and the reaction from the communities affected and then we finally see some genuine human love and care for the events we’ve witnessed over the last few days. On the one hand it’s a very complex issue that touches on race, class, alienation and pure anger; on the other hand should we be surprised?

We know that a man was shot in Tottenham. We know that the police were involved. But that’s it, as far as that one particular tragic incident is concerned. The family of the boy that died have had no explanation and it may be weeks, months, possibly years if we ever find out the truth. Historically, there’s a good chance we’ll never find out what happened that night.

Not for the first time, there was an angry reaction to that incident but what initially seemed like a race issue, turned in to a class issue and then pure anarchy, where the lines became very blurred and Britain erupted in to mindless violence and crime. I’ve seen some stuff on social networking sites and you tube that has made me sick and ashamed to be British but surely this was a week just waiting to happen. 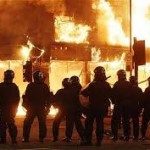 I’m not condoning the actions of the mainly young male population that turned on their own, burnt everything from small to high street business’ and then looted what’s left. It’s easy to say, ‘it’s a bunch of chavs stealing mobile phones and tracksuits’ but surely this problem runs deeper than that. What do we do? Round them all up and throw them in prison? What about the next generation of ‘chavs?’ Will they settle for second best?

People are angry in this country and in my opinion; they have every right to be. Even in 2011, with all the work we’ve done to close the class divide and to work on racial harmony, nothing much has changed. We can throw all the political correctness at it we like but if people are living on the poverty line, or feel victimised by the police and they see others not having to deal with those issues, then they have a right to be angry don’t they?

Once you step out your safe little bubble and and see what’s really happening in this country; the lack of opportunities for youth, the deprived and run down housing estates, the distrust of the police, the lack of connection and understanding our government has with real people, then I can understand why people are angry.

How can the under-privileged be heard in this country? They can’t. We saw the result of that frustration this week. And we’ll see it again, unless things change. It’s happening all over the world. It doesn’t matter if it’s in Syria or in Clapham, if people are not heard, they will get angry.

And what was the government’s response? To come back off holiday and appeal for calm? Brilliant, that’s good then. That should do it. The government are clearly out of touch with this situation. And when I say ‘situation,’ I don’t mean a couple of scousers raiding Curry’s. I mean a fairer and more just society; a Britain that gives everyone a chance to have a happy and fulfilling life. This is a wake up call. The time is now, to do something about it.