DANCING ON THE CEILING (IN THE OFFICE)

Hello peeps. Sorry for the lack of blog, I’ve been knee deep in show business. Shall we catch up? We had our second run in this year’s Brighton Fringe, after last year’s sell out ‘Bummer Lovin.’ This is a hour long comedy sketch show, I do with the funniest man in Hanover, Gorgeous George.

This year, we went for the more ambitious title of ‘7th Funniest Show in the Fringe’ and I’m pleased to say, that was about right. Not too funny but funnier than 64 other shows. We sold out both shows and had some decent reviews. Thanks to Lionel Ritchie, who clearly put bums on seats. This was our life-size cardboard cut-out imported from America, which cost £140 and now stands in my office (and scares the shit out of me, every time I enter). 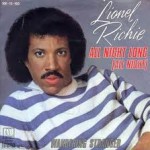 Our next project on the comedy front, (although we want this taken very seriously), is the launch of our new boyband, ‘Girl Krush,’ so called, because they crush girls. Have a look on You Tube for the album promo. We’re going to release a single and video, with a mini-documentary alongside it. Get ready to be Krushed.

I’ve also been filming some pilots for Latest TV, where I get to hang out with ‘a person of interest’ or ‘persons of interest’ for a day and delve into their interesting and glamorous lives. Annabel Giles was my first subject; former model, TV presenter and wife of Midge Ure. A fascinating woman with some great stories to tell, including hanging out backstage with Freddie Mercury at Live Aid and going to dinner with David Bowie. We’ve all been there. Next up, I’m spending a day with The Hoosiers, who have their own story to tell, after being dropped by their record label. I’ll post up links to all these shows, once they’re done and dusted.

I’ve just been asked to appear in my first ‘celebrity’ football match today; literally, half an hour ago. The caller said,’ Would you like to kick the cast of Hollyoaks?’ And I said, ‘yes.’ A dream comes true. That’s if I can get near them. I’m more Wayne Slob, than Wayne Rooney these days. Thinking about that though, there’s little difference. He’s let himself go that boy.