So Christmas is nearly upon us and I can honestly say; I’m not a huge fan. It’s become more bearable since I became a Dad and I like a couple of days off from work but on the whole, it’s a pain in the arse. Buying presents, travelling the length and breadth of the country and continuously explaining to people that you are vegetarian and you’ll have to skip the turkey sandwiches, is not a pleasure, it’s a chore. It could even come under the modern health concern, known as ‘stress.’

I get a lot of work during the festive period; mainly DJing and hosting work around Christmas parties in the corporate world. I’m very lucky to be able to do a job I enjoy and get well paid for it but I have to say, the job I got last week, topped the lot.

It was a corporate gig up on the Strand, in London for Shell Oil. They wanted a DJ and a host but also an unusual request for a ‘scrooge character.’ When I enquired further, they said that they wanted me to dress up as Scrooge, be in character for an hour and abuse all the employees of Shell Oil, whilst they were enjoying their drinks reception. This sounded too good to be true. I accepted on the spot and spent the next couple of weeks getting my costume together. 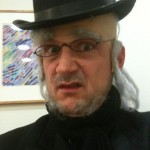 'I use L'oreal. Mainly because I'm worth it.'

My costume basically consisted of a grey wig, a hat and an old man’s suit, that smelt of wee. When the moment came to mingle, I revelled in it. I abused the Managing Director, I abused his wife and I abused everyone below him. I even abused the choir that had been hired to belt out the Christmas hits in the corner.

The most shocking thing about the night was the sheer joy I got from being rude to people. I didn’t want to come out of character, it was ridiculous. You know that feeling when you’re in a room full of strangers and you can’t be arsed with small talk? And inside your head you just want to tell everyone EXACTLY what you think of them?

I highly recommend it.